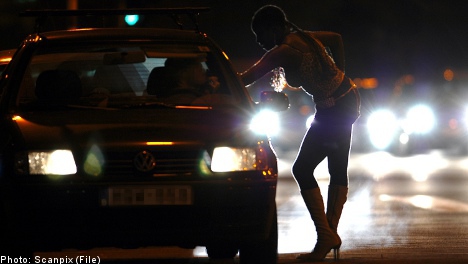 In Sweden, while it’s illegal to buy sex, it is not illegal to sell it.

But the social insurance agency has previously lacked clear rules outlining what social benefits are available to prostitutes who are registered as sole proprietors and pay taxes in Sweden.

Often, prostitutes who register with Swedish tax authorities claim they are working in body treatments and health care, sometimes making it hard for staff with the social insurance agency to know how to process benefits claims from prostitutes.

But now the social insurance agency has promised to clarify the rules.

“This situation has been considered to be a gray area, but I don’t think it should be. If you’re not doing anything illegal, I think it should be relatively clear,” said Joakim Jarnryd of the social insurance agency to Sveriges Radio (SR).

“Prostitutes in this case are engaged in no illegal business and if this person has declared a legitimate income and has proof of a registration with the tax authorities, then we’ll treat this like any other economic operator.”

While it is impossible to know how many people in Sweden use their sole proprietorship companies for prostitution, Swedish Tax Agency (Skatteverket) expert Pia Blank Thörnroos explained how the new rules would function legally.

“If someone has an income from the selling of sex then it’s taxable, as it’s legal to sell sex. We’ve solved it so that these people can submit their income declarations together with everyone else in May and report their incomes. If one wants to avoid arrears, the taxes can be paid at the tax office,” she told SR.