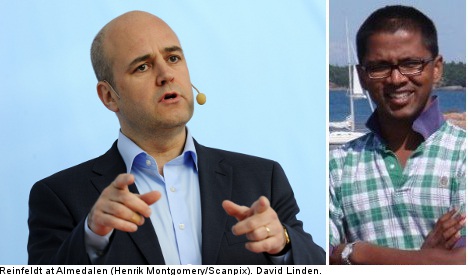 On Tuesday, the biggest topic of discussion was what Prime Minister Fredrik Reinfeldt, leader of the Moderate Party, might say in his speech that evening.

It was an opportunity from which he had everything to gain – and everything to lose. Not only did he have to prove that his centre-right Alliance government still had the initiative and speak on behalf of all the parties in the four-party minority coalition, but he also had to promote the Moderates as a party fit to govern Sweden and address concerns from within his own party.

When Reinfeldt arrived to his press briefing at Resturang Kalas in Visby’s harbour, he began straight away with his tasks.

All the journalists had arrived early – even KG Bergström, who sat down next to Claes Elfsberg, a famous news anchor for Sveriges Television (SVT).

When Reinfeldt entered the room he was wearing a blue tailored suit but no tie. He looked suntanned and decisive. He marched straight to the bar table that was placed in front of the journalists and gave a brief summary of what he was going to say in the evening.

He was going to talk about the European financial crisis, investments in growth and research, and what he called the “twenty-four-hour society”.

He was also proposing that employers and unions take part in the introduction of a pact to get young people working.

It turns out that he previously had cleared his message with Karl-Petter Thorwaldsson, the newly installed head of the powerful LO trade union association.

The two were both leaders of their respective party’s youth organizations back in the 1990s, with Reinfeldt chairing the Moderate Young Organisation (MUF) and Thorwaldsson heading the Social Democratic youth wing (SSU).

Back then Thorwaldsson called Reinfeldt “the soap” because he used slippery debating techniques.

When Reinfeldt took questions they were mostly about opinion polls, except for one that dealt with the high prices for ferries serving the Baltic island of Gotland. In his response one could trace the hint of ideology, something which is normally hard to do when it comes to Reinfeldt.

He was against regulating prices, he explained, but he could not stand there and promise anything, since he was a “responsible” politician. The word responsibility was also a reoccurring phrase in the speech.

The mood in Almedalen just before Reinfeldt’s speech was one of expectations.

More than four thousand people had gathered to watch the speech and the current chairman of MUF, Erik Bengtzboe, along with a group of followers were called on to serve as an opening act.

If the Alliance loses the next election, Bengtzboe might still be able to pursue a career as a cheerleader based on his ability to fire up the crowd.

After all, former US president Ronald Reagan was a cheerleader before he got into politics!

Despite Bengtzboe’s performance, not everyone applauded when Reinfeldt took the stage.

He began speaking about blue-collar workers who work in shifts.

They are many of them, explained Reinfeldt, and he had had a chance to meet a few during his time as prime minister.

He emphasized that the Moderates care about these workers as they are a part of the “foundations” of Sweden.

Work and employment was a recurring theme for the speech, in which Reinfeldt also appeared to take aim at a proposal put forward by the Liberal Party (Folkpartiet) that immigrants to Sweden should be required to learn Swedish before becoming citizens.

“Maybe you don’t need a language test to have a job,” he quipped, generating some laughter.

He also hinted that big “reforms” were coming in the autumn. In other words, the electorate should be ready to be feast on some political pork spending initiatives this autumn.

Reinfeldt’s speech, meanwhile, failed to mention the opposition and foreign policy was strictly limited to the crisis in the Eurozone and globalization.

Overall, the talk felt very mid-term, except for the message that the government was supporting a pact to get young people into jobs, something mentioned in the middle of the speech to ensure everyone got the message.

The message was pragmatic and he seemed more inclined to talk about what was to be achieved than what the government had already done.

It was very Fredrik Reinfeldt and rather boring.

Although, the jobs pact – if achieved – could be historic. And if the reforms in the autumn work out, he might win a third term.

Random observations from the ground

Professor Sören Holmberg, known as the guru of Swedish opinion polling, was seen in the audience at Reinfeldt’s speech.

Perhaps he was looking for someone or perhaps he thought back to 2010 when he said that the government would surely not be re-elected.

Also worth noting is how far things have come since the days when a sitting Swedish Prime Minister could speak off the cuff like Olof Palme did in the early days of Almedalen.

Per Schlingmann, Reinfeldt’s expert on electoral strategy, was present during both the press briefing and the speech. As Reinfeldt spoke, Schlingmann could be seen nodding approvingly, leading one to conclude that he had approved the message delivered by the prime minister.

In the press room following the speech, the buzz was that Reinfeldt had given one of the best speeches of the week. This puts pressure on Social Democrat leaders Stefan Löfven who is set to speak on Saturday.