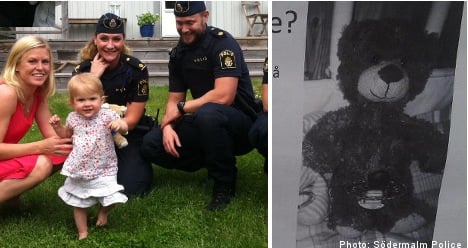 A good Samaritan found the missing teddy and handed it in to Stockholm police on Thursday, news that was announced soon thereafter via the local police department’s Facebook page.

“The teddy bear is back!!!” wrote the Södermalm police on their official Facebook page on Thursday evening, a message which garnered over 2,000 likes in less than 24 hours.

“Tyra’s beloved teddy was found by someone engaged in the search party. The bear was found on a wall near Kungsholm Church, not far from the where he disappeared, just like in many other cases,” they wrote.

One of the missing teddy posters was noticed by a local police officer, who took a photo and uploaded it to the official Södermalm police Facebook page, together with a caption urging fans of the page to join the search.

The act caught the attention of international media, with news outlets from around the world reporting on the Swedish police and their eagerness to help a toddler in distress.

However, when the police efforts proved fruitless after several days, officers made the news once again by giving Tyra a consolation gift of another teddy bear.

Now, police were on hand a third time as Tyra was reunited with her beloved bear.

“When we care and help out, we make a difference – that’s you, us, and everyone else,” wrote the police, adding as a final note that they wished everyone “a really lovely summer!”