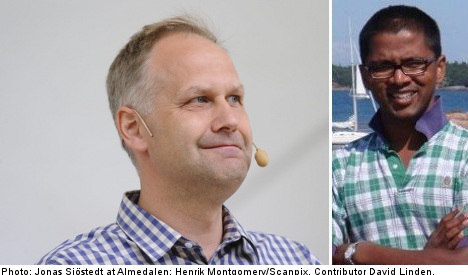 When Jonas Sjöstedt was elected as the new leader of Sweden’s Left Party (Vänsterpartiet) in January 2012, the intention was that he was going to change the party.

Following its heyday under Gudrun Schyman in the late 1990s when they were the protest party for disaffected Social Democrats, Sweden’s Left Party had reverted back into something of a sect under Lars Ohly, Sjöstedt’s immediate predecessor as party leader.

In the 2010 election, the Left Party was part of the red-green centre-left opposition coalition, despite many people not wanting them to be there.

The threat of “reds under the bed” ended up helping Fredrik Reinfeldt and his centre-right Alliance government. Lars Ohly proudly called himself a communist and refused to acknowledge that it was, to put it mildly, a “damaged brand”. But when he resigned, he was finally forced to do so.

But Sjöstedt a chance for a new beginning. He was a former steel plant worker who had been a successful member of the European Parliament. This made him an attractive leadership candidate: an international politician with working class roots.

The fact that he had donated a large amount of his MEP salary also helped. Especially when the other leadership contender, Rosanna Dinamarca, refused to pay the voluntary amount out of her salary each Member of Parliament is supposed to give to the party.

So when Sjöstedt took over as Left Party leader, he began the process of changing the party’s image. When asked, he picked the US over Cuba and he emphasized that one must always “prefer democracy over dictatorships”.

This was a sign of a modernizer and for a while there was talk of a “Sjöstedt effect” in the opinion polls. But that initial bump soon ended when Stefan Löfven took over as the new and pragmatic head of the Social Democrats, giving a lot of former sympathizers who had temporarily cuddled up to the Left Party a reason to return home.

When Sjöstedt yesterday took the stage in Almedalen, he knew his party was struggling to deal with the resurgence of the Social Democrats.

He also knew that he had to attract those in his own party who thought he was not left-wing enough, while also appearing to be a serious party that was ready to be in government. Finally he had to prove to the press that the “Sjöstedt effect” was still going strong.

These were three difficult tasks and as one person in the audience points out, “it’s going to be tough for him”.

And it did indeed turn out to be tough.

Sjöstedt chose to talk about something his supporters like: outlawing profits for private companies in the welfare sector. But at the same time, he supported consumers’ right to choose between privately and publicly run healthcare facilities.

He didn’t want to get rid of freedom of choice, but by outlawing profit Sjöstedt’s Left Party would get rid of any incentive for private companies to enter the welfare sector in the first place.

The position showed that Jonas Sjöstedt the modernizer was nowhere to be found.

He sounded very much like Lars Ohly and the Left Party of old. He did, however, talk about the climate and the environment, but not many people paid any attention to that part of the speech. This is a shame because Sjöstedt has a decent record from his time in the European Parliament as a champion for the environment.

When Sjöstedt attacked the government he also received some cheers from young leftists wearing Palestinian scarfs standing near the stage. You could easily recognize them because they looked young leftist from central casting: scarfs, dreadlocks and bearded.

Overall his speech gave nothing new, which leaves Jimmie Åkesson of the Sweden Democrats and Moderate leader Fredrik Reinfeldt as the only two party leaders that have actually offered anything new in party leader speeches delivered at Almedalen so far.

Later in the pressroom the buzz was that “not even left-wing social democrats like this” and the mood could be described as a disappointment among some.

However, young members of the Moderate youth organization (MUF) that had gathered at the Donners Brunn watering hole were all smiles following Sjöstedt’s speech.

A person placed high up in the group’s hierarchy was overheard saying “we just got a little bit closer to winning 2014”.

So while the new Left leader might have pleased the dedicated rank and file with his speech, it probably didn’t win him any new votes.

Moreover, journalists seemed more excited over rumours that US television host John Stewart might be in Almedalen. The rumours quickly proved to be unfounded, however. Stewart wouldn’t be there in person. He was simply the topic of a seminar. Oh well.