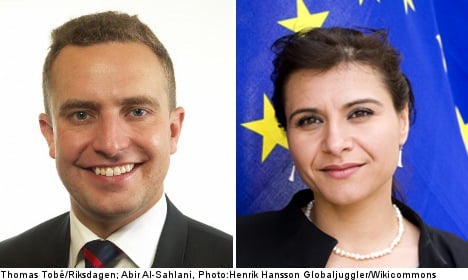 “I was initially surprised but when they explained more I was very happy,” al-Sahlani told The Local after being chosen as Sweden’s sexiest female politician.

“It feels great. Fortunately, it pays to be outspoken.”

Currently a resident of the south Stockholm suburb of Hägersten, al-Sahlani was born in Iraq and launched her career in politics in Härnosand in northern Sweden as the youngest representative on the governing board of the local Centre Party chapter.

Her father, Abid Faisal al-Sahlani, headed the National Democratic Coalition, a political party in Iraq, and once helped broker a meeting between his daughter and Iraqi prime minister Nuri al-Maliki.

According to Nyheter24, al-Sahlani is sexy because she “time after time has shown that she stands for what she believes in”.

Sweden’s newly crowned sexiest male politician Tobé, meanwhile, was chosen because he “among the best of all politicians at breaking into a smile”.

After being active in the Moderate Party’s youth wing MUF, the 34-year-old native of Gävle in eastern Sweden launched his professional career by starting a communications agency.

In 2006, Tobé returned to politics, entering the Riksdag as an MP when the Moderates took power. He focused at first on employment and business issues before becoming the party’s education policy spokesperson in March 2012.

Tobé and al-Sahlani top Nyheter24’s annual list of Sweden’s ten sexiest male and female politicians, presented to coincide with the Almedalen political gathering held on the Baltic island of Gotland.

To qualify for consideration for the list, chosen by the editorial staff at Nyheter24, politicians must be ministers, MPs, party secretaries, or chair or vice-chair of their party’s youth organizations.

According to Nyheter24, they can be “hetero, gay, trans, tall, or short” but must “offer something more than being a stiff politician”.

Nyheter 24’s acting news editor, Henrik Eriksson, explained the deciding factor is the personality of the politicians and not their good looks.

“It’s about being yourself and doing things in a different way,” Eriksson told The Local.

He explained that reactions amongst the winning politicians varied, but most of them are really happy to have made the list.

“When they realize this is not about good looks, many of them think it’s a blast. Some have got many congratulations and even texted me to say thanks,” Eriksson said.

But when the politicians were asked who they think are the most sexy politician, a lot of them were reluctant to mention a name.

“A lot of them chickened out,” said Eriksson.

“It’s really fun to have been nominated the third sexiest politician by Nyheter24 and the second most good looking woman in Almedalen by Expressen,” she told The Local.

“But as a politician I also of course hope to be judged by the good work that I do and not just by my looks. I understand that one of the criteria for the competition was personality so I’m very pleased that they’ve judged me on my character and political work, too. Or at least I hope so!”

“Some of them might be a bit jealous but most of them just think it’s fun that I’ve made it onto the lists,” she said.

Meanwhile, the fourth sexiest male politician, Mathias Sundin, joked about his inclusion on the list.

“It’s about time!” he told The Local via Twitter.