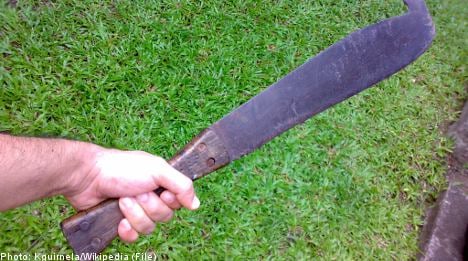 He was found guilty of a number of charges, including attempted murder, illegal threats, and animal cruelty, reported local media.

“His actions were exceptionally ruthless, and have caused the woman mortal fear and anxiety. We’ve concluded that her presence of mind during the attack, as well as another person rushing over, saved her from even graver consequences,” said Tomas Sandström of the Hudiksvall district court in a statement.

The 33 year-old man’s violent outburst began on the afternoon of 15 March, as he slashed the woman repeatedly in the knee and the face with his knife, causing her to lose an eye.

Leaving the bleeding woman behind, the man made his getaway by car, but soon thereafter crashed it into a ditch.

When a minivan full of high school students and teachers stopped to help, he continued his attack, putting his machete against the throat of one of the teachers, and knifing a dog found inside the van.

Forcing the passengers to get off, he then hijacked the van and sped off once more.

Police finally caught up with the man when he crashed his getaway car once more.

However, police were forced to fire a warning shot and shower the man with pepper spray before he gave up and the police could make their arrest.

Initially the man was believed to have been suffering from psychiatric illness when he went on his rampage, as he had been in and out of psychiatric wards since 2010.

However, the psychiatric assessment showed that he was not psychotic at the time of the attack, meaning his eight-year sentence will be spent in prison rather than in psychiatric care.