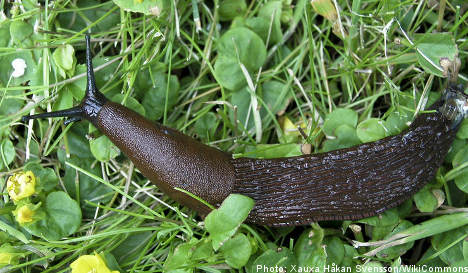 The garden of Hilkka Risberg, 65, has been littered with chewed-up lettuce, missing herbs, and damaged flowers ever since the Spanish slugs, known colloquially in Sweden as “killer slugs” (mördersniglar) invaded her backyard plot in Gävle.

“It all started three years ago – and they ate everything. I began by taking them out of the garden but they just kept coming back, so I started to kill them,” she told The Local.

As Risberg noticed that her killing figures were steadily growing over the years, she decided to keep a journal tallying her kills for each day, in an effort to see if numbers were indeed rising.

“Since May 10th this year when I started the journal, I have killed 14,518. Not all from my garden, but also from a 500 metre stretch that the garden backs onto,” she said.

“My best day was July 27th – a really rainy Tuesday. On Tuesdays it’s “Old Members” day at the golf club for the over 55s, and I was walking to the golf course when I realized it was closed. I did a double session that day, both morning and night.

I killed 425 that morning and 388 that evening. I did it all with an umbrella in my hand and my weapon in the other. I guess I had extra energy from not playing golf!”

And Risberg’s weapon of choice?

A one-metre long stick with a forked end. She claims it is the fastest death for the slugs and means they don’t suffer.

“Before, I used secateurs to chop their heads off, but I got terribly bad knees from bending down all the time and now have had to have two knee replacement operations,” she told The Local.

“And the secateurs were impossible to clean, the slime never comes off. Whacking slugs is my only exercise these days, I can’t walk so much – I can’t even do a whole round of golf anymore with these knees.”

Risberg explains that while the slugs are not only eating her garden, she also thinks they are “revolting cannibals” – as she has even witnessed them eating the dead bodies of one another.

While Risberg admits she is usually animal friendly, she claims to respect the opinion of people who take issue with her massacres.

“Some people have told me it’s cruel, but I bet those people kill mosquitoes and flies. I respect their opinion, but these slugs don’t belong in Sweden, they have no natural predators. It has to be a person. And if I don’t do it, who will?”

The Spanish slug, or Arion lusitanicus as it is formally known, is a species foreign to traditional Swedish fauna. The slugs were first seen in Sweden in 1975.