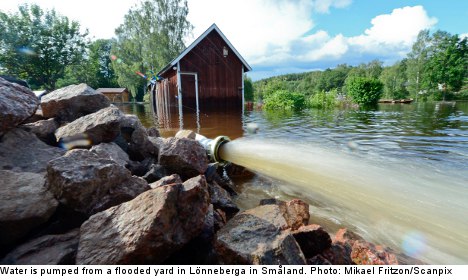 Flood-hit areas in Småland in south central Sweden are expected to receive an additional five to ten millimetres of rain on Tuesday, according to weather agency SMHI.

“There’s going to be more precipitation further north,” SMHI meteorologist Stefan Flodin told the TT news agency, adding there was also a chance of thunderstorms as a low pressure system moved across the region.

The agency’s class 3 flood warnings, issued late Sunday, were expanded on Monday night to include other areas in Småland after measurements revealed a rapid rise in the water levels at Hulingen lake near the town of Hultsfred.

“At first, we didn’t believe the results, the water was higher than we thought. Within the hour we were measuring, the water rose five centimetres. That’s a very large rise for a lake as large as Hulingen; one can see it’s going to be problematic,” SMHI hydrologist Bent Göransson told TT late on Monday.

Emergency crews in Hultsfred have been battling waters from the flooded Silverån river.

“We have several pumps going to pump the water back and we also have the river under observation,” emergency services worker Torbjörn Rosenius told TT.

On Monday, a nearby levy burst, forcing several residents to watch as their yards became flooded by the rushing water.

“We’re seeing a slight improvement as the water is starting to drop a bit, but it’s going to be several days before we say any major improvement,” said Rosenius.