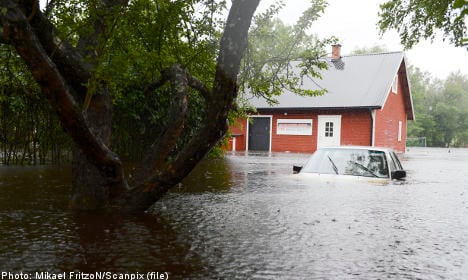 “We are building a wall around the treatment plants in Hultsfred and Målilla. We absolutely cannot let any water get in there,” said Andreas Enberg, head of Hultsfred’s rescue team, to the TT news agency.

The area around the Hulingen lake near the town of Hultsfred is worst affected after the heavy rains, but the situation may worsen with forecasts indicating that the torrential weather will continue.

In the last twenty four hours the water in the lake has risen by 38 centimetres and is continuing to rise.

However, the flooding in Mariannelund, Lönneberga and Silverdalen has started to retract, according to the website of the Kalmar County Administrative Board (Länsstyrelsen), and is now flowing towards the coast.

”We are prepared and observing the situation,” said Marcus Årskog, secretary of press at MSB, told the news agency.

Hultred’s camping site, which is located next to Hulingen, has been issued with a class 3 flood warning after the water reached the camp site’s lawn.

Maik Rohde, the head of the campsite, has warned everyone against setting their camper vans or tents near the edge of the lake.

Some parts of the area are already covered by water and since water from the river Silverån is continuing to spill into Hulingen, the situation is not going to change.

“We have received some cancellations, but mainly from Norwegians and Danes who have been able to read about the warning. But surprisingly people have also made reservations because they want to see the flooding,” Rohde told TT.

Emergency services in the municipality of Vetland are reinforcing the dams in Pauliström, east of Vetlanda, where a paper and glass factory are at great risk of being damaged.

”Worst off is the industry area where there’s a risk of water spilling into the buildings. We have seven or eight people on location and factory staff are helping out,” Bruno Pilåsen, the head of Högalandets rescue association, told TT.