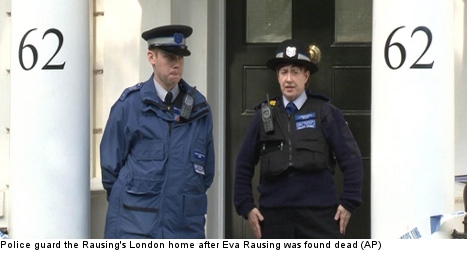 Officers had found the American’s body on Monday during a search of the five-storey townhouse, after arresting a 49-year-old man, believed to be her husband, on suspicion of possessing drugs.

The man was then further arrested in connection with the 48-year-old woman’s death, but has since been moved to a medical facility where he is still receiving treatment, police said.

A spokesman for Scotland Yard told AFP he was not able to confirm that the suspect is Hans Kristian Rausing, who stands to inherit his Swedish father’s multi-billion dollar carton empire.

The death is being treated as “unexplained”, police said in a statement.

A post mortem on Tuesday failed to establish a formal cause of death and further tests are being carried out.

The family, headed by Rausing’s father Hans, is the 12th richest in Britain, worth £4.3 billion ($6.7 billion), according to The Sunday Times newspaper’s Rich List 2012.

Eva and Hans Kristian Rausing were active philanthropists and enjoyed an affluent lifestyle, spending much of their time in their 11-bedroom mansion in Barbados — but had well-publicised problems with drugs.

The couple, who have four teenage children, first met at a US addiction clinic and were charged in 2008 after Eva tried to take crack cocaine and heroin into a function at the US embassy in London.

Court documents revealed that she had been carrying quantities of crack cocaine, heroin and diethylpropion, a banned stimulant and appetite suppressant.

A further drugs stash of diazepam, a drug used to treat anxiety, was also found in her car, and police found more crack cocaine, heroin and cocaine when they searched the couple’s home.

Although they were initially charged with drugs offences, prosecutors subsequently decided to drop the charges and instead give them a conditional police caution.

“I have made a serious mistake which I very much regret,” Eva had said in a statement at the time.

“I intend to leave as soon as possible to seek the help that I very much need.”

Slim, blonde and glamorous, Eva was the daughter of Tom Kemeny, a wealthy US Pepsi executive whose family lives on an exclusive island off the South Carolina coast.

Her parents said they were “deeply saddened by the death of their beloved daughter”.

“Eva was a devoted wife for 20 years and mother of four much-loved and wonderful children,” they said in a statement on Tuesday.

“During her short lifetime she made a huge philanthropic impact, supporting a large number of charitable causes, not only financially, but using her own personal experiences.

“She bravely fought her health issues for many years. The family is devastated at her death and asks to be given privacy at this difficult time.”

The Rausing family said they were “deeply shocked and saddened to hear of the tragic death of their daughter-in-law”.

Action on Addiction, one of several addiction charities which the couple supported, said it was “devastated” to hear of her death.

“Without any desire for public recognition, Eva has, through her wonderfully generous support of this and other charities helped so many people for over 20 years,” said a spokesman.

He developed the Tetra Pak business, which had been founded by his own father in 1944, into a multi-billion dollar operation that revolutionized the packaging of food and drink.