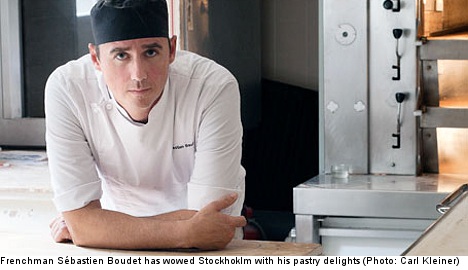 Sébastien Boudet is known for his passionate views on bread, a reputation which contributed to Sveriges Radio (SR) decision to name him as one of a select group of notable “Swedes” chosen to host this year’s annual national summer radio programme Sommar (“Summer”).

Boudet arrived in Sweden in the beginning of the 2000s and opened up his award-winning café Petite France in the Stockholm district of Kungsholmen in 2008.

In 2011, he announced that he was selling the shop to concentrate on hosting bakery courses across the country, to write a cookbook Den franske bagaren (“The French Baker”) — which was published in March 2012 — and to lead the Swedish struggle for the perfect sourdough bread.

The Local: So, why did you first come to Sweden?

Sébastien Boudet: Same reasons as most, I guess. For love. I got myself a one way ticket on the train from Paris and came to Sweden to join my girlfriend.

TL: What did you do at home?

SB: I had been moving around a bit actually, working in Spain and in the US as a chef prior to coming to Sweden.

TL: What did you do when you first came to Sweden?

SB: Well, my first priority was finding a job. Having lived in many different places before and always managing to find a job within a week or so, I was surprised to find that it was not that easy in Sweden. I went to restaurant after restaurant looking for employment but couldn’t find anything.

I also asked in bakeries – but they mainly made Swedish cakes which I – of course – was unfamiliar with. It wasn’t made easier by the fact that no hotels seemed to have their own in-house pastry chefs. Finally I found a job in a hotel as a chef de partie for fish – and of course I accepted it.

It took them a few days to realize that I had other skills and that I was actually a lot better with bread than with fish – and then I got to work as a pastry chef instead.

TL: How long did it take you to learn Swedish? Is that important for an expat?

SB: It probably took me about two years to become fluent in Swedish. It is very important to learn the language – that goes for any country – but I think in particular to be able to take part in Swedish culture you must learn to speak their language. A tone, a gesture, a joke – it is crucial to be able to share these things.

TL: How did you begin doing what you are doing now?

SB: The thing with me is that I am rather a chaotic person and tend to be doing a hundred things at the same time. And what I have been doing has been changing from the very beginning.

Ultimately I am a baker, but when I first opened my café in 2008, I might have baked 5,000 croissants in a day, making sure they were perfect to sell to customers. Today perhaps I make five perfect croissants, take a picture of them, sell the picture and the recipe to a magazine, and maybe 50,000 will taste them. It is the same job, but a different aspect of it.

TL: What was the easiest/most difficult thing with trying to ‘make it’ in Sweden?

SB: I guess it all depends on your profession, but I found that starting up a business was fairly easy in Sweden compared to France and other countries. Of course there is a lot of paperwork and things that have to be dealt with but everyone speaks English. Nothing is impossible here.

TL: What are the keys for an expat to ‘make it’ in Sweden?

SB: The keys to making it in Sweden are not to stress out about the language thing too much in the beginning. Get a job and let the language come naturally – because it will.

TL: What would be your advice to someone thinking about trying to start a company or do their own thing in Sweden?

SB: Go for it! If you have a good idea – a good concept – you should just do it. But make sure you work here for a bit first, learn from others and get an idea of the industry you want to break into.

SB: I love the nature, and the culture. There is also a respect for authorities such as the police and the fire brigade in this country which I think is lacking in many other places. Also, the fact that you can get in your car and be in the middle of a wood within 5-10 minutes.

The only thing I don’t like is the double-standards here which sometimes remind me of the US. People here may love the blueberries on their plate but not want to think about the living conditions of the Thai berry picker that harvested the berries.

TL: Here at The Local, we have an on-going feud regarding the word elk versus the word moose. How would you best translate the Swedish word älg to English? What about in French?

SB: I would probably go with moose – although I have to admit that it isn’t a word that I use in English very often. In French it’s élan – a bit nicer, no?

Sébastien Boudet’s blog is called Brödpassion (“Passion for bread”) and he can be heard speaking about Sweden – and why every loaf he bakes has its own soul – on Swedish national radio channel P1 on Saturday, July 14th at 1pm.