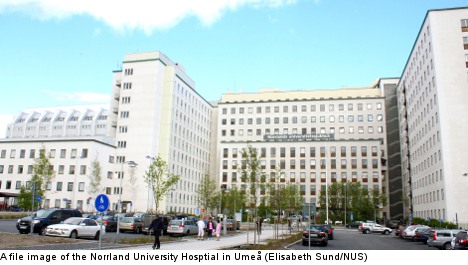 Concerned relatives of Leif Vinberg, a resident of Holmsund in northern Sweden, contacted police in early July after several days passed without any contact from the 62-year-old.

While police in turn contacted several local hospitals to inquire as to whether or not Vinberg had been admitted, their search failed to turn up any trace of the man.

“When the police couldn’t find him either, we feared the worst,” Vinberg’s daughter told the local Västerbotten-Kuriren (VK) newspaper.

But following additional media reports about Vinberg’s disappearance, he was finally “found” on Wednesday at the Norrland University Hospital in Umeå.

As it turns out, Vinberg had been rushed to the hospital by ambulance on June 28th after falling and suffering a head injury.

But no one at the hospital bothered to contact relatives of Vinberg and inform them that he had been admitted.

Hospital staff also failed to provide accurate information about Vinberg when police had previously asked whether or not he might be at the Umeå hospital.

Norrland University Hospital is now investigating the incident in hopes of determining how the breakdown in communication took place.