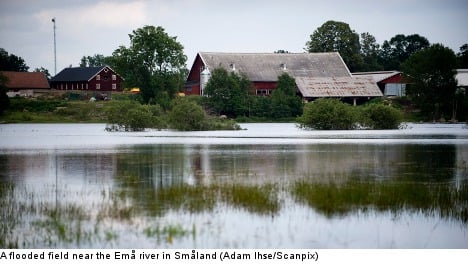 “We haven’t received any reports over night related to the floods. If nothing else happens, we can instead focus on planning and follow ups,” Clas Lövgren of emergency services in Jönköping told the TT news agency.

The danger of more serious flooding in much of Jönköping County appears to have passed after a day furious work by emergency crews to prevent more widespread flooding in the area.

As of Thursday morning, water levels in swollen lakes reservoirs had begun to drop.

Late Wednesday night there were fears that a dam on the Emå river near the Flen lake might burst, but as of Thursday morning, there were no reports of a breach.

“The plant couldn’t handle the high water flows and couldn’t take in all the water that came. It led to untreated sewage flowing out into the late,” Roger Lundquist of water management firm Dala Vatten told TT on Wednesday.

“Water has incredible power. It really does what it wants,” she told Svergies Television (SVT).

She added that dealing with climate change and higher water levels would result in increased costs for society in the future.

“Huge investments are going to be needed. The entire city of Gothenburg is at a level which means that if water levels rise, we must plan on building levees. And if Lake Mälaren’s water lever rises, what will we do with Slussen?” she said, referring to the central Stockholm locks separating the lake from the Baltic Sea.

As flood waters slowly subside, forecasts from weather agency SMHI indicate that there is a miminal threat of renewed flooding due to additional precipitation.

“There will be some isolated thunderstorms in Götaland, some of which may result in heavy rain, but according to forecasts, it doesn’t look like it will be more than 10 millimetres and in eastern Småland there will be very little rain,” SMHI meteorologist Eva Strandberg told the TT news agency.

A band of showers associated with a low pressure system over central Sweden is also expected to pass over Dalarna, Värmland, and Gästrikland.

“Dalarna will get some rain, but not that much,” said Strandberg.