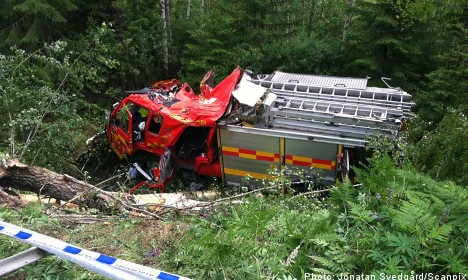 The crash occurred on Thursday afternoon outside of Söderbärke in Dalarna, according to police reports.

One of the firefighters who died is a man in his thirties. The other firefighter died later in the afternoon.

The other three firefighters, one of which is a woman, have minor injuries, according to Lars Andersson with emergency services in Dalarna.

The two firefighters who died had been trapped following the accident.

All of the firefighters involved in the accident worked part time for the fire department.

The accident occurred just after midday on Thursday when the fire engine passed another truck and lost control.

“Opposite is a ravine that is seven metres deep. They went straight through the fence there and directly down, so that the vehicle was hit around and ended up at the bottom of the ravine,” said Lars Andersson.

The Smedjebacken municipality has set up a support group for counseling, offering people a place to gather for support.

The group contains support personnel and counsellers from the Swedish church and the police.

Meanwhile, the police have begun a forensic investigation into the crash.