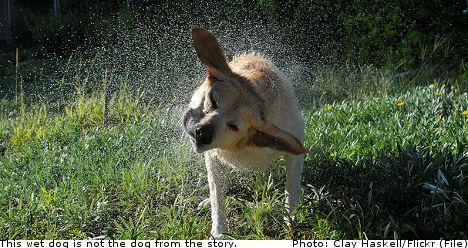 Things unexpectedly took a turn for the bizarre after a man found a wandering dog in the northern Swedish town Sollefteå and drove it over to the local police station.

The dog was left to wait inside the car while the man went inside the police station to speak with the officers.

During his absence the car somehow rolled down into the Ångermanland river.

Seeing this, the man rushed out and threw himself into the river. With a knife, he managed to smash the rear window, and the lucky dog was able to swim out and return safely back to land.

The man then tried unsuccessfully to keep a hold of the sinking car, which drifted away from the shore.

“He held onto the car, but it drifted and then it sank. But a guy was there who saw what happened and jumped in to help him,” said the man’s mother to the local newspaper Allehanda.

In rescuing the dog, he’d injured his hand while breaking the window, and yelled back to shore that he was exhausted and unable to swim anymore. Hearing this, a police officer threw himself into the water, in turn saving him.

The dog has now been returned to its owner and the man who rescued him has been restored to health after a quick sojourn at Sollefteå’s hospital for his injured hand.

As for the car, however, local police reported that it sank to the bottom of the river.