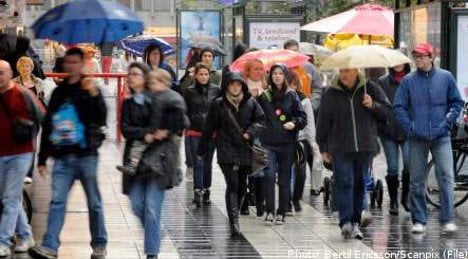 On Sunday, parts of Sweden were hit by heavy rain showers with Meteorological agency SMHI releasing a class 1 warning in Gävleborg, Uppsala and Stockholm regions predicting 50 millimetres of rainfall in eastern Sweden.

According to the agency, this week’s weather is set to look very similar to that of Sunday’s, where a clear morning developed into rain and thunder by lunchtime, eventually clearing up again later in the evening.

Temperatures throughout the week are set to hover between 15 and 20 degrees Celsius.

SMHI states that the best chance of sun comes from northern Norrland, however the southern half of Sweden won’t be so lucky, with heavy rains expected there too.

According to SMHI, there aren’t any changes in sight, with meteorologists forecasting that there are no signs of a high pressure system heading into the Sweden to help push the wet weather out of the country.

“We have a prognosis that stretches to next weekend and two days into the week after that. No higher pressures will come in this period,” said meteorologist Lovisa Andersson to the Dagens Nyheter (DN) newspaper.