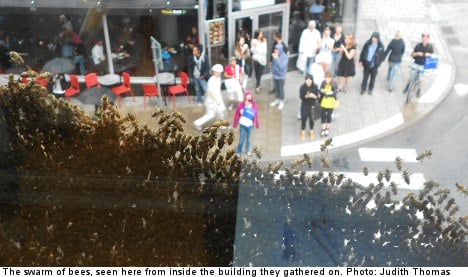 More and more people in Sweden are jumping at the chance to own a beehive, despite not knowing exactly how to control their hum, leading to swarms of bees taking over Stockholm at the weekend.

“Many new keepers haven’t thought of it. They think that the swarming season is over and so they go on holiday without providing the controlled supervision they should be,” said Karolina Lisslö of hive management firm Bee Urban to the TT news agency.

On Friday afternoon, shoppers and pedestrians were terrorized for three hours after one cluster of bees made a make-shift nest on the windows of the H&M headquarters in downtown Stockholm.

The bee-plague continued on Saturday when Södermalm pedestrians felt the sting as a second hum caused chaos in a neighbourhood in Stockholm’s southern district.

Bee Urban, a company that leases and manages 27 bee hives around the capital, claims that their bees have not been responsible for the weekend swarms.

“We have frequent and regular inspections and our queens have their wings clipped,” she said.

When the hives become crowded, the bees choose a new queen and when she hatches, the old queen leaves the hive along with 3,000-5,000 bees in search of a new home.

When experienced bee breeders notice traces of a queen cell, they can divide the colony in order to avoid swarms.

“We make an artificial swarm and add a queen with clipped wings. We don’t want to get the call saying that there’s a swarm in the NK clock,” she told TT, referring to the landmark timepiece that towers 25 metres above central Stockholm.