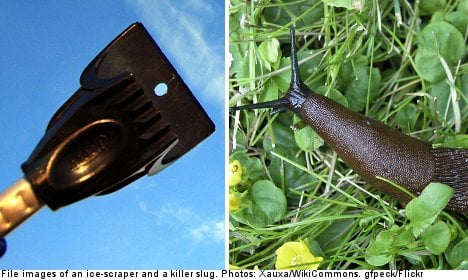 76-year-old Sven Lagergren has had enough of the “killer slugs” (mördersniglar) that have taken over the gardens of his café, Gula Huset, in Brålanda, north of Gothenburg.

Using a long handled ice-scraper with a 10 centimetre wide blade, the 76-year-old firmly slices the slugs in half with one quick jab.

“I don’t miss,” he said, adding that the slugs die immediately.

The Spanish slug, or Arion lusitanicus as it is formally known, is foreign to traditional Swedish fauna but has been ravaging gardens across the country since first being seen in 1975.

Lagergren has been killing the slugs every summer for three years now, but it wasn’t until this year that he began keeping a tally.

And with this summer being especially wet, he thinks the rain has given him more work this year than ever before.

“It’s this damned weather’s fault! It’s been raining so much this summer that they’re everywhere. Today’s quite sunny, I’ve only killed 100… but on one rainy day I killed 4,700.”

Lagergren explains that he has tried poisoning the slimy creatures, but hasn’t seen any kind of decline in numbers, and so decided to take matters into his own hands.

“What can you do, they don’t stop coming!? They even eat the ones I’ve killed. They’re disgusting!”

When asked if he had heard of Hilkka Risberg, 65, from Gävle, who recently told The Local about the 14,000 slugs she had killed this summer, Lagergren confirmed that he had.

With a kill count of 27,700, does this make him Sweden’s most successful slug hunter?

“I guess you could say it’s some minor form of celebrity status,” he chuckles.

“But I’d much rather be known for something more fun than all this.”