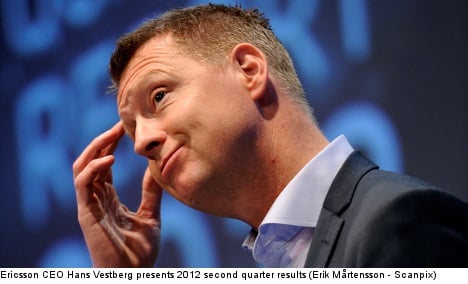 Net profit dropped by 63 percent from the same period a year earlier to 1.205 billion kronor ($173 million), well below an average analyst forecast of 1.67 billion kronor compiled by Dow Jones Newswires.

“Demand for global services and support solutions was strong, while networks sales decreased year-on-year mainly due to the expected decline in CDMA equipment sales as well as lower business activity in China,” it quoted Ericsson president and chief executive Hans Vestberg as saying.

He referred to an older mobile telephone transmission technology that is giving way to newer ones.

In addition, “our joint venture ST-Ericsson is still in a challenging situation due to a significant drop in sales of new products to one of the largest customers and continued decline in legacy products,” the Ericsson boss said.

ST-Ericsson, which is jointly owned by Ericsson and the Franco-Italian semi-conductor manufacturer STMicroelectronics, lost $318 million in the second quarter, an increase of 44 percent on the loss it posted a year ago.

Ericsson also reported billing delays that hurt its bottom line, but did not provide details.

Despite the negative results, Vestberg remained bullish on Ericsson’s long-term prospects due to the expected increase in demand for data-heavy smartphones.

“Today there are more than 700 million smartphone subscriptions and according to our estimates this number will increase to three billion in 2017,” he said in a statement.

“Based on these drivers, we see an increasing focus from our customers on network performance and quality of service. This will require continuous operator investments in hardware, software and services.”