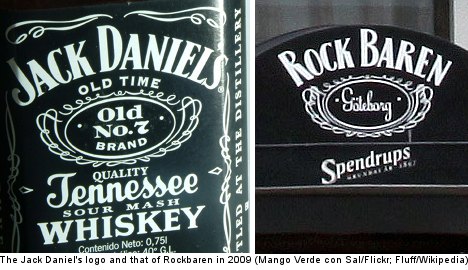 The filing of the lawsuit is the latest escalation in a long-running dispute between Jack Daniel’s and Rockbaren over the pub’s logo, which the storied US whiskey brand claims bears a clear resemblance to its own “Old No.7 Brand” logo.

“The logotypes are clearly designed to resemble the Jack Daniel’s trademark with the aim of benefiting from its appearance and reputation associated with the trademark,” reads the lawsuit, filed with the Stockholm District Court last week by the Roschier law firm.

The suit further claims that the logo might lead Rockbaren patrons to mistakenly assume the bar has been approved as having an official “Jack Daniel’s bar”.

The US whiskey maker is demanding Rockbaren pay up 1.4 million kronor ($202,000) to continue using the bar’s current logo, including 1.2 million kronor in unpaid licencing fees and 200,000 kronor in damages.

Corsman, who took over ownership of Rockbaren in early 2011, explained that the dispute began with the bar’s former owners, but that several changes have been made to the logo since Jack Daniel’s first expressed concerns about its similarities with the Tennessee whiskey’s trademark.

“It’s not at all the exact same thing [as the Jack Daniel’s logo],” he told GP.

“I think the whole thing seems a bit suspicious.”

While he refrained from wading in specifically on the merits of the lawsuit, Corsman added that he reckoned Rockbaren could weather the financial hit should Jack Daniel’s win the lawsuit.