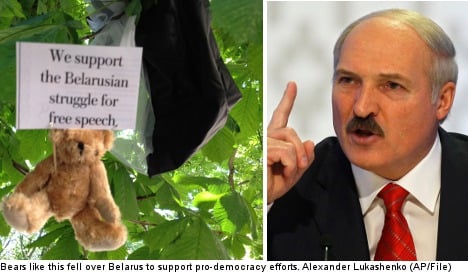 “You have spent 20 billions of euros on an air defence system that could not detect a homebuilt aeroplane with a cargo of teddy bears,” Per Cromwell, founder of Studio Total wrote in an open letter to the Belarusian president.

The letter, released on Wednesday, comes following the arrests in Belarus of journalist Anton Suryapin and realtor Syarhei Basharymau for their suspected involvement in the high profile publicity stunt carried out by the Swedish PR firm.

Suryapin, who was among the first to publish pictures of teddy bears reportedly dropped from a Studio Total-piloted aircraft over the Belarusian town of Ivyanets, was arrested on Friday, July 13th by Belarusian security service KGB.

He remains in KGB detention on suspicions of helping foreigners to enter Belarus illegally – a charge that carries a sentence of three to five years in prison, prompting calls for his immediate release from Reporters Without Borders.

According to Charter 97, a news website associated with the Belarusian opposition, Basharymau has been detained by the KBG for allegedly renting a flat in Minsk to the Swedes.

Tomas Mazetti of Studio Total, one of the pilots of the plane that penetrated Belarusian air defences, told Charter 97 that Basharimau simply gave Studio Total representatives a key to a flat.

“It’s like arresting a bartender who sold us beer in Minsk,” said Mazetti.

However, concern over the arrests – as well as frustration over continued claims by officials in Belarus that the teddy bear drop was a hoax – prompted Cromwell to pen the open letter in an attempt to set the record straight.

“We want to make the following facts very clear: Studio Total never told Anton Suryapin or indeed any other Belarus citizen in advance about what we planned to do,” the Studio Total founder wrote.

“It was easy to find all we needed to know about Belarusian air defence on the internet (Wikipedia), and the description was the same everywhere: a brutal, but severely malfunctioning mechanism, best suited for parades and for harassing civilians.”

In a statement released to The Local, Cromwell, who was on the ground in a car in Ivyanets at the time of the drop, emphasized that Studio Total organized the campaign from Sweden, dismissing as “laughable” claims in state-controlled Belarusian media that the agency had been paid off by “western intelligence services”.

“We are fully prepared to show our accounting to the KGB if they are interested,” said Cromwell.

“You lead a regime that puts all its energy into pretending that the patient is healthy, but none into curing her.”

The Studio Total founder closes with a challenge to Lukashenko, often referred to as Europe’s last dictator, arguing that the people of Belarus “deserve change” and promising to “answer all your questions” about how they “cheated your air-defence systems” with the pro-democracy publicity stunt.

“If you absolutely must jail and abuse people – why not invite us? After all, we were the ones who flew the plane, not some poor guy who happened to sell us chocolate,” Cromwell wrote.