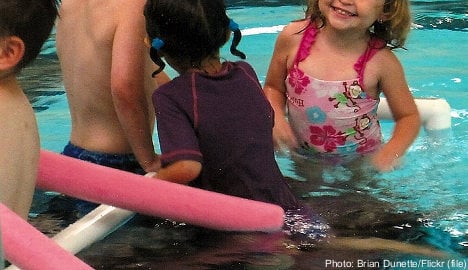 “We have given up on swimming classes and will be practicing at home instead,” the mother, Lorena Abubakar, from the Stockholm district of Bandhagen told daily Dagens Nyheter (DN).

According to Abubakar, the course, which was organized by the municipality of Stockholm, claimed it would teach the children to manage 25 metres of backstroke swimming and 25 metres of breaststroke at the completion of the course.

But when the course finished, not a single one of the participating 5-year-olds had learned to do either after 16 lessons.

“Several of the parents were upset that the kids had just been allowed to play in the water throughout the whole course,” Abubakar said.

But when Abubakar contacted the municipality to get her money back she was told that the course required that the children practiced at home.

And municipality planning director for sports, Kjell Olofsson, told DN that the city doesn’t guarantee that all the children will know how to swim after completing the course.

“That is our aim and what we are teaching, but we don’t go out and make any definite promises,” Olofsson told DN.

However, he didn’t think that there were reasons enough to lower expectations of the children’s swimming proficiency after the completed course.

“These goals are set based on the children’s developmental phase and are probably decided upon internally together with the Swedish Life Saving Society (Svenska Livräddningssällskapet – SLS),” said Olofsson to the paper.

Neither did he think that the course’s stated goals amounted to false advertising, despite none of the children learning how to swim.

“Absolutely not,” he told DN.

According to the paper, Stockholm municipality has no plans to reimburse the disgruntled parents.

A recent study suggests that there are significant differences between the quality of swimming courses within the greater Stockholm area.

The survey, carried out by insurance company Trygg Hansa, showed that 25 percent of Stockholm children between 4 and 17 can’t swim.

In the district of Västertorp, south of the city, 39 percent of the participating children could swim after completing the course. The corresponding number of children from posh inner city district Östermalm was 86 percent.

“This is unacceptable. Knowing how to swim could be the difference between life and death,” said the deputy mayor for education in Stockholm, Lotta Edholm, to the paper.