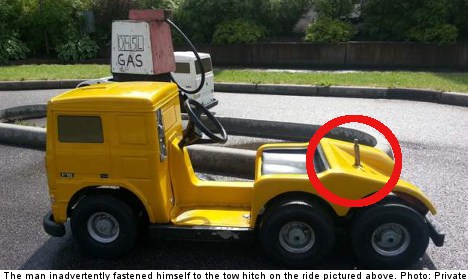 “It was a complete shock to the whole body,” the man told local paper Arbetarbladet.

The man had been visiting Furuvik theme park near Gävle in eastern Sweden with his two young daughters aged 2 and 4. The girls were enjoying the park’s minicar rides, but the 4-year-old needed some help with operating the vehicle.

“She can’t step on the gas pedal herself, so I lifted her up and jumped on the back of the truck so she would fit in front of me,” the father told the paper.

But while doing so the unsuspecting father failed to see the tow hitch protruding at the back of the vehicle. The man’s jeans ripped and as the hook penetrated the man’s rectum, it injured him internally in the direction of his urethra.

“It was terribly painful,” said the man to the paper.

The man started screaming and tried to move off but his rear end was stuck to the vehicle. Upon hearing his shouting, a theme park employee helped him off the ride, the paper reported.

When finally loose, the man was bleeding profusely from his derriere and was helped to a lavatory where he could wash. He was then given a pair of shorts and work pants by the staff. He was also treated to lunch by the park.

Despite trying to keep a brave face for the sake of his little girls, the man was dreading the looming hour and a half car ride home, according to Arbetarbladet.

When finally back at home, the man started to shiver and soon developed a very high temperature. After seeking medical assistance it was established that he had bacteria in his blood and was subsequently treated with penicillin against the infection and morphine for the pain.

On Friday morning he was still undergoing treatment in hospital but was hoping to be well enough to go home soon, the paper reported.

Erika Rydstrand, the Furuvik marketing director, told the paper that nothing like this has ever happened before despite the ride being one of the park’s oldest. She also added that it is not supposed to be for adults.

“Not even in your wildest dreams could you foresee an accident such as this. He must have sat down very hard seeing as his trousers were also ripped,“ she told the paper, adding that the incident was regrettable.

According to Arbetarbladet, police are currently investigating the incident, which has been classified as causing bodily harm, and will be questioning the 31-year-old man about how the accident happened.

The tow hitch has reportedly been removed from the vehicle.