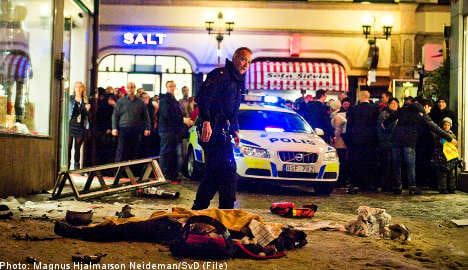 During the trial, which ended in Glasgow on Wednesday, Menni denied working with Abdulwahab, who blew up his car and then himself in a botched attack near a busy shopping street in Stockholm on December 11, 2010, killing himself and injuring two people.

After a 11-week trial and a two day deliberation, the jury announced that they found Menni guilty of funding the Stockholm attack.

The verdict on the conspiracy to murder charge was, however, not proven.

Menni stood accused of acting with Abdulwahab and others to further terrorist aims by criminal and other means, including the use of explosive devices, the Glasgow High Court in Scotland heard.

He also allegedly transferred money to Iraqi-born Abdulwahab, communicated with him repeatedly by telephone, online and in person between 2003 and 2010.

Menni was also charged with fraudulently accessing three bank accounts and of claiming benefits and pretending to be an asylum-seeker in order to stay in Britain.

According to the BBC, police found the accused to be in possession of a number of bank accounts in various names through which he sent funds to Abdulwahab with the purpose to fund the attack.

The money helped pay for Abdulwahab’s trips abroad for the “purposes of Jihad” and the Audi car used in the bombing, according to the broadcaster.

Menni was under suspicion by the police for some time before he was finally arrested in March. He has categorically denied being Abdulwahab’s accomplice.

Abdulwahab, a 29-year-old whose family fled from Iraq to Sweden in 1991, had lived with his wife and three children in Luton, in north London before the botched attack, where he had allegedly befriended Menni.