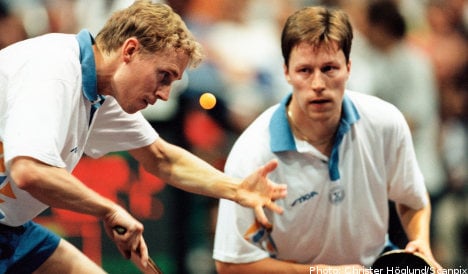 Jörgen Persson in action at the 1996 Atlanta games

The former world champion from Sweden is delighted that English lessons have been made a compulsory part of the Olympic preparation for Chinese table tennis players this year.

The policy has been introduced by China’s table tennis association to encourage its players to relate better to other competitors in a sport in which they swept away every individual medal in Beijing four years ago.

“For all countries this is very important,” said Persson, who is well-placed to make such a judgment since he will have competed in all seven Olympics of which table tennis has been a part since 1988.

“I hope they learn English so more people can understand them, so that the world can get to know them,” the 46-year-old Oslo-based player added. “They are nice people with nice personalities.

“I like them. It would be really nice if they spend time learning English. You would like to be able to speak with them even more. You want to get to know them better.”

Persson’s opinions are shared by the President of the International Table Tennis Federation, Adham Sharara, who last month expressed his admiration for what the Chinese are attempting.

“If they communicate in English then the entire world will listen, which is an exceptionally positive step and adds an extra dimension to the global appeal of our sport,” Sharara said.

Table tennis has commanded a significant position within Chinese society for five decades and the language initiative is comparable with that of the so-called “ping pong diplomacy” of 1971, which helped China communicate with Western politicians.

So, despite the crushing dominance which Chinese players have long exerted on the game, Persson has been captivated by their social ambitions as well as their skill.

“I admire them and the way they have taken table tennis forwards,” he said, highlighting four of the all-time greats during his astonishing two-and-a-half decade career.

One is Jiang Jia-Liang, who became world champion at Gothenburg in 1985 and New Delhi in 1987 with a now unfashionable pen-grip style.

“He was a classic Chinese player, with a very strong forehand when you could play like that,” said Persson, referring to a tactical era when shots played on one side could dominate the entire table. “And he was very strong in the head.”

Another is Kong Linghui, the world champion at Tianjin in 1995. “He developed till he became strong all round. And he developed his mind. Those who win at the top level are all strong in the mind,” Person asserted.

And the current world champion, Zhang Jike, who won the title last year in Rotterdam, has become a true innovator, Persson reckons.

“He uses a backhand flick as a weapon from all over the table and developed it so it comes really quick. He developed the game and made it tougher to play against.

“It would be really great to think we can get to know them better. It would change things a lot.”

Persson, who won his world title at Chiba in Japan in 1991, will retire when these Olympic Games end.