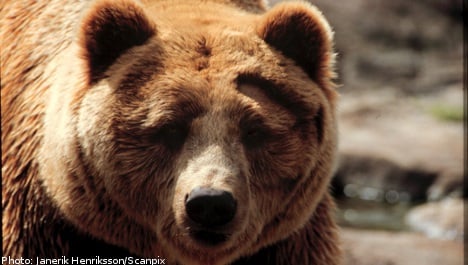 The man, 20-year-old Robin Engström from Strömsund in western Sweden, was attending a village fête in Flykälen in Jämtland when he headed into the woods, equipped only with beer and cigarettes, for a little wander.

After losing his way and unable to find the path back to the party, Engström continued to march through the blueberry bushes, ending up some 7 kilometres from the village, according to a report in the local Östersunds Posten daily.

His friends had meanwhile become concerned over the whereabouts of their chum and called the police to report him missing.

While the police began to assemble a search party, the missing Engström was getting close and personal with a brown bear.

The 20-year-old managed to save himself by dashing up a hunting tower, climbing onto the roof and proceeding to bash on the tin roof in order to frighten away the hungry predator.

He remained on his perilous perch for the next three hours while the police continued their attempts to locate him.

“I drank up the last of the beer and then I sat and smoked. One shouldn’t get unnecessarily stressed,” Engström told the Expressen daily.

After a long uncomfortable wait Robin Engström was found by the police after they were able to reach him by telephone.

Around midnight he was able to climb down from his perch and return to the safety of urban society. The bear meanwhile had made its way back into the vast Jämtland forests.