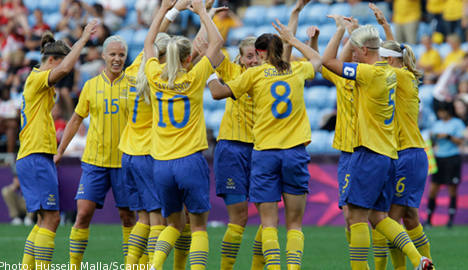 “They could have scored even more if they would have had to,” said SVT expert commentator Glenn Strömberg to daily Expressen.

The Swedes dominated the game from the beginning, scoring three times in the first twenty minutes.

“It was part of our tactic to open strongly. We wanted to show that we we ruled the game from the start,“ said Sweden captain Nilla Fischer, to daily Svenska Dagbladet.

Fischer scored in the seventh minute from the edge of the box after her shot deflected off South African defender Refiloe Jane and past keeper Roxanne Barker.

The next goal followed from Lisa Dahlqvist in the 20th minute, quickly followed by another by Lotta Schelin in the 21st.

South African player Portia Modise then caught Swedish keeper Hedwig Lindahl on the hop in the second half, scoring a spectacular goal from just beyond centre circle.

“I saw early in the game that the goalkeeper’s weakness was always coming off her line,” explained Modise to Fifa.com after the game.

However, the Swedes were quickly back in their stride and Schelin scored her second in the 63rd minute.

Sweden coach Thomas Dennerby was pleased with the result, although he said that there will be tougher games ahead.

“We got into the game from the beginning, played aggressively and created goal chances and I am very pleased with that. At the same time – we know it will be tougher against Japan and Canada,“ said Dennerby to SvD.

His goal from the beginning has been to get the team to the semi finals – and this goal seems just a little bit closer after Wednesday’s win.

“We have a great feeling within the team but we know it will take some hard work and that we bring our best game to every match,” Dennerby told the paper.

Sweden will face Japan on Saturday.