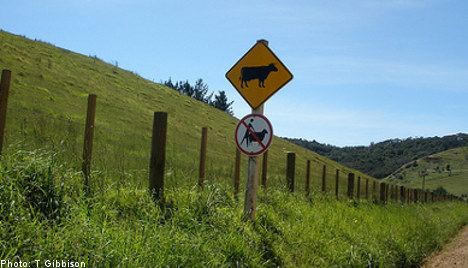 A farm hand is reported to have received a shock when he wandered past the field shortly after 3pm on Monday afternoon and witnessed the elderly man in the act.

“The employee saw that the whole episode was, how shall I put it, close to completion,” said Ronny Götesson at the Ronneby police to the Kvällsposten daily.

According to the newspaper the man was taking no chances before making his carnal approach, neutering any potential resistance from the stricken animal by binding its back legs together.

He is reported to be a man of slim build, in his 60s or 70s, and was last seen dressed in a shirt but no trousers.

Ronneby police are now on the look out for the man, who is wanted on suspicion of cruelty to animals.

It is unclear if the sheep sustained any injury in the alleged attack.

Sex with animals (tidelag) was previously a criminal act in Sweden but was de-criminalized in 1944.

If the animal is however deemed to have sustained injury in the attack then the perpetrator can be tried for animal cruelty.