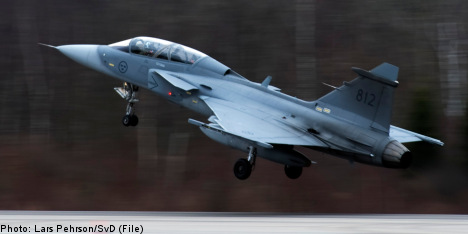 The military in March supported an earlier proposition voted through in the Riksdag that Sweden should develop up to ten of the E/F model Jas.

But according to SR, the army and the government in May received a cost prediction from the Saab Defence Group, a figure reportedly way above what was expected.

In January, SR reported that the expected price tag on the development of the new super jet would reach the vicinity of 32-33 billion kronor ($4.7-4.8 billion), but this figure has allegedly since risen significantly, according to the broadcaster.

This puts new strain on an already stretched Swedish Armed Forces, which had already come to the conclusion that economies have to be made and that policy decisions about future cut-backs or more government hand-outs must be taken.

Several sources have revealed to SR that the military on Monday will be informing the government that billions of kronor must be cut back from the development of other weapons systems planned for 2013 and 2014 to be able to afford developing the new super jet.

At the same time, the army has long warned that several other weapons systems are in crucial need of updating.

Lieutenant General Jan Salestrand of the Swedish Armed Forces was unwilling to disclose any particulars but told SR that it is a complicated situation.

“An upgrade is necessary if we want to have an air force system in the 2020s and toward 2030 to equal the development in the rest of the world. At the same time, from the military’s point of view, it cannot be done at any price,” he told the broadcaster.