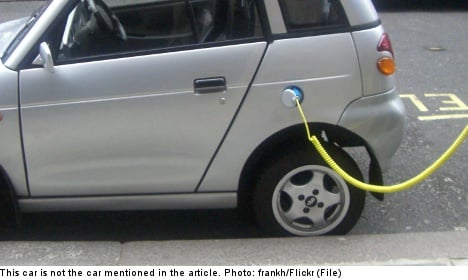 After six months only 96 premiums have been paid out, equating to a mere 4 million kronor ($584,000) of the 200 million kronor earmarked by the government for the project, according to new figures from the Swedish Transport Authority (Transportstyrelsen).

The government first mooted the initiative in 2010 with the ambition that 5,000 low-emission cars would be sold during the parliamentary term (which ends in 2014).

Swedish car industry lobby group Gröna Bilister argued that the figures illustrate that the 40,000 kronor ($5,840) premium is too small to make a difference.

“If you look at one of the more popular electric cars they cost around 350,000 kronor, in comparison to say a VW Golf which costs around 200,000. The premium is too small to change behaviour,” said Mattias Goldman at Gröna Bilister to The Local.

He argued furthermore that while there is an underlying consumer demand for electric cars, there is a “ketchup effect” when it comes to new technology and that point has not yet been reached.

The organisation would like to see the Swedish government to learn from its European neighbours on the issue and use the vehicle tax system to reward eco-friendly consumers.

“We would need a system as in France where the best cars get the highest premiums and the worst cars the highest penalties,” he said.

Goldman also argued that a key issue to be addressed is the expansion of rapid battery charging facilities in Sweden, pointing out that there are currently only ten.

“In Norway the government helps to co-finance these. Experience from the biogas market in Sweden shows that this type of system can work,” he said.

The Swedish government was not overly concerned with the paltry payback after six months of the new premium system, with Mattias Johansson at the department of the environment arguing that it was too early to draw any conclusions.

“This year we have only made available 500 premiums and the thinking is that sales should increase gradually,” he told Dagens Nyheter.

Johansson added that it is possible that an evaluation of the system will be conducted, “but only after a year”.