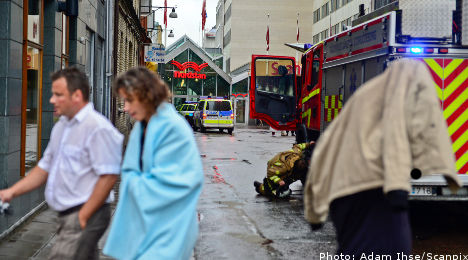 Emergency services were alerted to the mall, as there was a risk of the roof caving in.

“It turned out that the inner ceiling in some stores had collapsed, but no carrying parts fell. The centre is now partially closed, and we’ve cordoned off all areas where there may be further collapses,” Peter Engström, head of Gothenburg’s emergency services, said to the TT news agency.

Saturday shopper Yvette Palm was in Nordstan when the alarm went off.

“They called out in the loudspeakers that there was a fire, and then the sprinkler system went off,” she told TT.

“Guards came and said that the roof was about to cave in, but many were reluctant to go outside anyway, because it was pouring down outside.”

The rain, which continued to fall for roughly an hour and left 30 millimetres of rain behind, forced trams to stop and caused a fair amount of trouble on roads.

The Swedish Transport Administration (Trafikverket) warned that the massive amounts of water were severely limiting access to highways E20, between Olskroksmotet and Ånäsmotet in both directions, and E45, from Lärjemotet to Agnesbergsmotet.

At underpass Radiomotet several cars ended up below water.