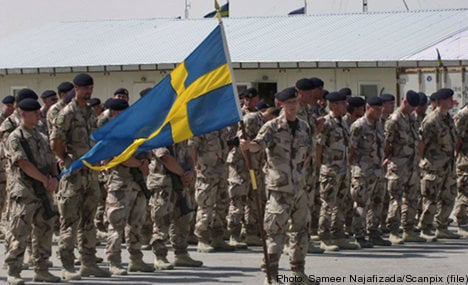 Some 24 interpreters have filed applications for asylum claiming that they fear for their lives when the NATO-led International Security Assistance Force (ISAF) withdraws its troops, according to a report in the Svenska Dagbladet (SvD) daily.

The Swedish Migration Board (Migrationsverket) however responded that the law would need to be changed to enable the interpreters to come to Sweden.

According to the board’s assessment, the Taliban are not currently considered to be strong enough to pose a threat in Mazar-i-Sharif to grant automatic asylum.

Furthermore the board never grants asylum to groups of people, even as a precautionary measure.

Sweden is in the process of reducing its troop presence in Afghanistan as part of the NATO-led International Security Assistance Force (ISAF). By 2014 Swedish troops are scheduled to have completed their withdrawal from Afghanistan.

The interpreters have enabled the Swedish forces to engage with the local population in the vicinity of their base as many are unable to speak English.

According to the Swedish aid organisation the Swedish Committee for Afghanistan (Svenska Afghanistankommittén – SAK) there is plenty of evidence to indicate that Afghan resistance groups routinely kill any locals who have worked with ISAF.

“It is enough to look at the last time the Taliban took over… It is a question of settling old scores,” said SAK’s secretary-general Torvald Åkesson to SvD.