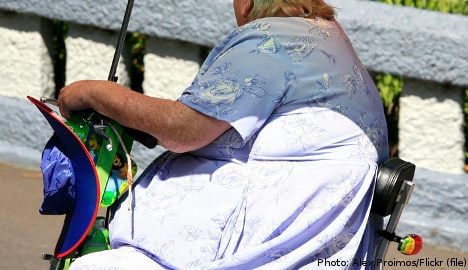 “It is terribly insulting to be limited in your daily life like this,” said a representative for the woman, Göran Magnusson, to local paper Skånskan.

The woman, who is clinically obese, was recently given a new electric wheelchair by the health clinic in order for her to be able to get around unhindered.

However, according to the woman, she still is not able to do her food shopping without help from the transportation service, as she said she couldn’t power the wheelchair and carry the bags of shopping at the same time, according to the paper.

The disabled transport service, known as “färdtjänst”, is available to handicapped individuals in Sweden who are unable to travel by ordinary public transport.

At the end of May the woman was told that she would no longer be entitled to the service as the combined weight of the chair and herself exceeded 300 kilogrammes, which is the safety limit for the vehicle.

The company that provides the service has argued that their cars are not supposed to carry the type of electric wheelchair that the woman is using, which is meant for outdoor use.

“We are trying to help and we tried for a while, but it has turned out it just won’t work,” said company manager Bo Möller to the newspaper.

The woman lives some distance outside of central Malmö and despite the chair being an outdoor mode of transportation, she is afraid that its batteries will run out before she reaches her destination, leaving her stranded half-way home.

Magnusson has meanwhile penned a letter to the local authorities on behalf of the woman in which he calls the company’s decision “discriminatory”.

“She has as much right to use transportation service as anybody else. Now she’ll be stuck in her house, unable to move far from her home,” Magnusson wrote, according to Skånskan.

However, the transport company maintains that they have done all they can for the woman and that she is more than welcome to use their services provided she uses a normal wheelchair, reports the paper.