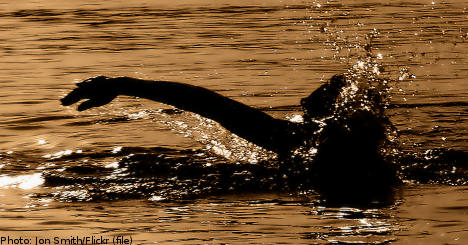 The 18-year-old stole a car from Strandvägen in Falun shortly before 5am on Sunday, according to a report in the Dalarnas Tidning daily.

The tipsy teen’s antics however stirred the slumber of the car’s owner who gave chase in another vehicle while calling the police.

The police joined the chase and were able to put a halt to the teenager’s joyride close to lake Runn which lies between Falun and neighbouring Borlänge.

The hapless car thief however declined to accept that his early morning outing had come to an end and he attempted to outsmart the police unit on foot.

The police resumed the chase and the young man felt obliged to throw himself into the lake and attempt a waterborne getaway by swimming his way across the 66 square kilometre body of water.

The police however called in reinforcements in the shape of a boat and the young man was finally captured and taking into custody while way out in the water.

The sodden Swede was taken to the police station and a blood test indicated that he was well over the alcohol limit for driving a motorized vehicle.