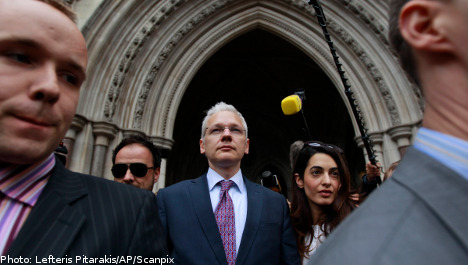 “The important thing is for Julian to be assured that Ecuador is considering with great responsibility” his request, the president told Assange’s mother, Christine Assange, during their hour-long meeting.

Assange, 41, is seeking asylum in the South American nation to avoid his extradition to Sweden, where he is accused of sexual assault.

“I feel as a mother that he is not capable of the charges — not even the charges, the allegations against him,” his mother said in an interview with AFP at the Carondelet presidential palace after she met with Correa.

Christine Assange echoed her son’s fears that Sweden would extradite him to the United States to face charges for releasing masses of US military and diplomatic documents into the public domain.

“The US government feels that it can seek to try my son for espionage, and possibly executing him simply for doing the job of a good investigative journalist, which is telling the truth about power,” she said.

The United States has opened a criminal investigation into the leaks and is prosecuting US army private Bradley Manning in a military court. But it has not said whether it intends to bring charges against Assange as well.

Assange’s mother declined to discuss the substance of her conversation with Correa, but she is counting on his sympathy.

“The president, and his ministers, are very knowledgeable intelligent and compassionate people, genuinely so, and they have a good understanding of the case,” she said.

“It’s not a secret that the president and his foreign minister believe this case to be political,” she added.

Correa said his country has a “great humanist tradition and respect for human rights.”

He added that he respects Britain, Sweden, and the people of the United States, and that the matter bears consultation, but that, ultimately, “Ecuador does not negotiate over its sovereignty”.

Meanwhile, Assange told AFP that based on “a chronological history of the Swedish investigations and based on the fact, there is absolutely no doubt” the charges against her son are part of a political persecution against him.

During her meeting with Correa, Assange expressed her “concerns and qualms about what could happen to Julian Assange if he is extradited to Sweden by the British government,” Foreign Minister Ricardo Patino told reporters.

Assange sought refuge at Ecuador’s embassy on June 19th, fearing that he could be extradited to the United States from Sweden to stand trial for espionage, on account of the trove of leaked US diplomatic cables and military logs that were published on his whistleblower website.

The leak represented the biggest breach of US intelligence in history.

12th, after the London Olympics are finished.

Correa has often been at odds with Washington and offered Assange asylum in 2010.

He vowed earlier this month that his government would not yield to pressure from Britain, Sweden or the United States in deciding whether to grant Assange asylum.