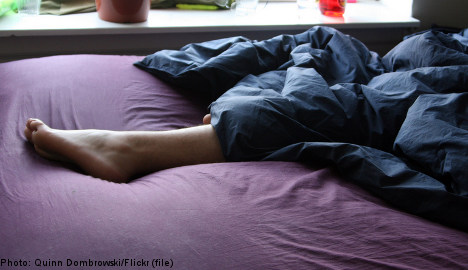 The foot visible in the picture is not that of the man in the article.

Just prior to bunking down with the unsuspecting female, the 35-year-old man had kicked a couple of doors in the apartment building in an apparent search to find himself a place to lay his head.

The man managed finally to kick his way into the woman’s apartment and crashed out naked on her bed.

“It was a wooden door, containing hay. It was fairly easy to kick it in,” said Anders Wennergren at Vänersborg police to local media.

The commotion had however awoken the woman from her slumbers and faced with the shock of being woken at 5.30am and having an uninvited bedroom companion, she fled to the balcony.

When the police arrived at the apartment the man was found sound asleep on the woman’s bed, still in his birthday suit.

The police detained the man and once he has sobered up he will be given the opportunity to explain his nude nighttime escapades.

The man is suspected of two counts of criminal damage and one of trespassing.