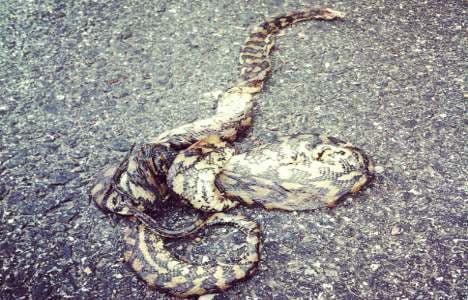 Kajsa Arnoldsson, 32, found the restful reptile in the middle of the road outside her parents’ house in Långedrag, a suburban area west of Gothenburg.

“I was both surprised and interested to find it there,” Arnoldsson told The Local.

“My mother on the other hand was really scared, fearing it could be a poisonous snake, like an adder or something.”

Arnoldsson swiftly uploaded a photo of the reptile to Facebook in order to seek help in identifying it. However, it was quickly determined that it was neither a grass snake nor an adder, which is the only venomous snake in Sweden.

“Someone on the forum said it was an exotic snake called Diamond Python,” said Arnoldsson.

The Diamond Python is a subspecies of carpet python (Morelia spilota) and is not a poisonous snake. Its natural habitat is south-eastern Australia.

Asked if anyone has contacted her about their missing pet-snake, Arnoldsson explained that so far no one knows where the snake came from.

“It’s just been left to its fate, for insects to eat it,” she said laughing.