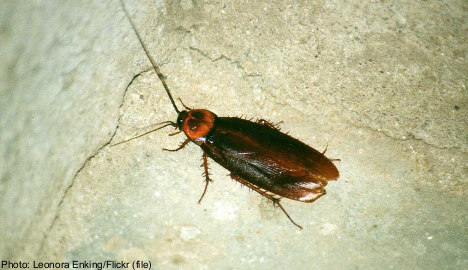 The bug in the picture is not the bug mentioned in the article.

“The rats, a bug and the cockroaches became my family. You may laugh at it today but that is how it was,” Jens Månvinge told daily Aftonbladet.

An acute lack of funds persuaded Månvinge to become a narcotics courier in the mid-90s but he was foiled in Thailand and sentenced to death, a penalty later changed to 30 years imprisonment.

“It was the consequence that I had to face, but it was hard to know how to deal with that amount of time,” said Månvinge to the paper.

Månvinge was taken to the Thai Klong-Prem prison, also known as the “Bangkok Hilton”, which is built to hold 6,000 prisoners but in reality holds twice that amount.

He told the paper that he survived his first time in the jail by planning his escape, but later changed his mind and aided a fellow prisoner’s flight to freedom.

However, this support came at a severe cost as he was punished with two and a half months of isolation. This period of time he spent chained to the wall in a dirty cell, with only rats and bugs for company.

However, the fact that the cell was infested was what saved him from going mad, according to Månvinge, who befriended his small cell mates.

“They became my friends. I turned to them and felt a support, like you do from a pet. They meant the world to me,” Månvinge told Aftonbladet.

He named the male rat Louisiana Joe and the female Big Mama, according to Aftonbladet. The bug was called Den Senila Skalbaggen (The Senile Bug).

“I couldn’t always see their eyes but I knew they were watching me. In that kind of situation, these things become important,“ he told the paper.

Månvinge spent six years in Thai prison before being transferred to a Swedish jail.

In 2007 he was able to re-enter society and has now written a book about his experiences in Thailand entitled Den senila skalbaggens tröst (The comfort of the the senile bug).