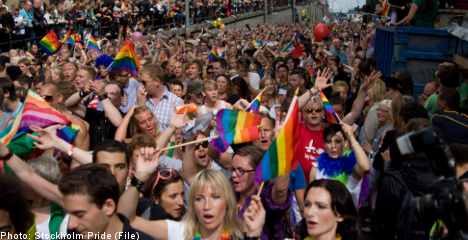 According to the organizers, roughly half a million people turn out on the streets to watch and cheer the parade along its path, making Stockholm Pride the largest LGBTQ festival in the Nordic countries.

Over 150 cars, floats and groups have signed up to participate in the parade, which will start off in the posh Östermalm neighbourhood park Humlegården at 1pm, and dance, walk or skip across town to the finish line at Tantolunden park in Södermalm.

The parade means large areas of Stockholm’s central areas will be cordoned off, and this year the police have increased their presence in the city further, due to extreme right-wing anti-Muslim demonstrations that will be held by Norra Bantorget at the same time as the parade.

“Both Pride House and Pride Park have been well visited, and we’ve had long lines outside both areas,” said the festival’s manager Alf Kjeller to DN.

One major reason why the checkbooks are balancing up this year is that entrance to the festival area at Pride Park in Tantolunden is no longer free as it was last year. This year visitors must cough up 450 SEK ($67) for admittance to the area.