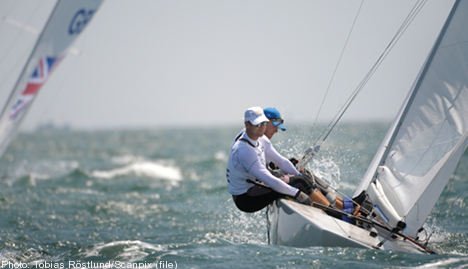 “I didn’t really get it until the Brits came up to me and congratulated me,” said Salminen to national broadcaster Sveriges Television (SVT) after the win.

Lööf and Salminen began Sunday’s race third in the overall standing but managed to outperform both the British and the Brazilian team and snag the gold medal, Sweden’s first in the competition.

This is the fifth consecutive Olympic games that Sweden gets a medal in a sailing event, according to Daily Dagens Nyheter (DN). In the last three, 2000, 2004 and 2008, Sweden has brought home a bronze.

“To get a gold medal –that is of course the biggest thing,” said Lööf to SVT.

Despite leading when going into the finish, Brits Iain Percy and Andrew Simpson finished eight in the finish.

“It feels cruel sometimes. It was ridiculous conditions at the end. We feel a little robbed, but that is the way it goes,” Percy told the BBC.

Assistant sailing coach for Team Sweden, Thomas Rahm, said to SVT that they always knew the pair had a chance to win but that it was very slim.

“They won because they are so skillful. They are incredibly thorough, almost unsoundly thorough. But you have to be that precise to win at this level,” Rahm said.