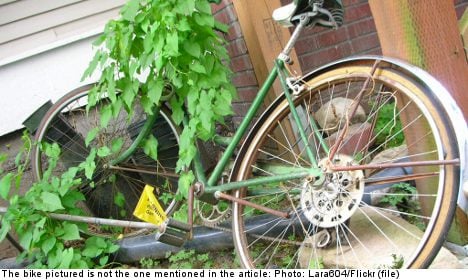 The man found the bicycle on a Saturday and wanted to bring it in to the station immediately. However, as it was a bank holiday and the lost property office at the local police station was closed, he had to bring the bike home with him and return at a later date.

The man then brought in the bicycle a few days later, queued for some 40 minutes, and was then able to hand in the bike.

When the bicycle was subsequently claimed by its rightful owner, officers sent the man a notice that he could come to the station to get his finders-fee, which had been estimated to 40 kronor ($6).

The man was not happy with this as the police website claims that the finders-fee should make up some 10 percent of the object’s market value.

According to the man, estimating the value of the bicycle – which he claims could only have been two or three years old – to 400 kronor is wrong, when a new cycle from the same manufacturer costs 5,000-6,000 kronor in the shop.

“To underestimate the value of people’s time in this manner is risking decreasing the rate of solving cases. Many (myself included) will leave bikes lying in a ditch rather than turn them in if the finders-fee isn’t more substantial than this,” the man wrote in his report.

When the man complained to the police, his request for a more substantial finders-fee was turned down. Hence, the man has now reported the police to the Ombudsmen for Justice in parliament.