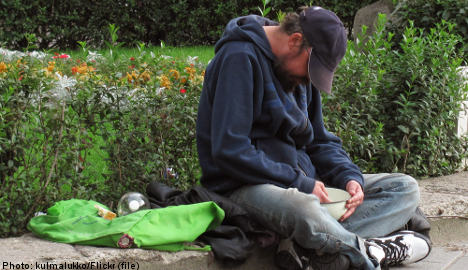 “It works just like crowd funding,” explained co-founder Jan Persson to The Local.

“We hire people to beg, they decide how they want to do it under our coaching, and then we pay them a wage of 100 kronor ($14.9) per hour. Plus they get to keep 50 percent of the money they are given.”

The company, Persondesign, is a newly founded company in Sweden’s charity sector.

They have placed an advertisement in the Situation Stockholm magazine, sold by homeless people on the streets of the capital, calling for 50 beggars to work the busy central Stockholm street of Drottninggatan on August 18th for four hours.

“We’re hoping to hear from all sorts of people. Those who may already be beggars, students, unemployed people – anyone really,” Persson said.

According to Persson, the response has already been large, with 30 people already signed up for the shift, although not all the feedback has been positive.

“We knew the idea would be a bit provocative, and together with the positive responses we have had a lot of negativity. Many people don’t want any more beggars on the streets of Stockholm.”

And how does Persson anticipate the outcome?

“It’s impossible to say, we don’t think this has been done before, but if it works – it works. We’re running a business and we want to make the world a better place,” Persson told the Local.

“Why not do this through begging?”