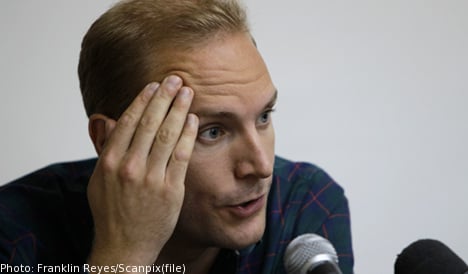 27-year-old Modig was one of four people in the car that struck a tree in the southeast of Cuba, killing Oswaldo Paya, a winner of the Sakharov Prize for human rights, and another Cuban dissident, Harold Cepero Escalante.

“I don’t remember the accident. I have some memories of the car swerving off the road. Then I woke up in an ambulance not knowing where I was,” Modig told daily Dagens Nyheter (DN).

When Modig woke up again at the hospital, he found two police officers next to his bed who wouldn’t leave his side for the entire hospital stay.

The next day he was taken to the local police station where he was questioned by police and got to see the Swedish ambassador to Cuba, Caroline Fleetwood, with whom he was allowed to have dinner at a local hotel.

The following day he was brought back to the station where he was kept all day. Later he was flown to Havana, escorted by two officers, he told DN.

It struck Modig that as he was being moved, no one would know of his whereabouts.

“And that is not good in a dictatorship. So of course I was worried.”

After touching down in Havana, Modig was driven to a secret location where he was to stay for the next five days in a windowless room furnished with just a bed.

There, he was interrogated extensively. Sometimes the questionings went on for hours, sometimes for only 15 minutes, Modig told DN.

“They kept asking me the same thing: ‘Why are you here? Who has sent you?’ Every other statement was a telling-off. ‘You shouldn’t come to our country to interfere!’,” he told the paper.

One day he was brought to the migration authorities where he was allowed to see the ambassador. Toward the end of the week they gave him better clothes and let him shave for the first time during his ordeal.

After a press conferece he was brought to the ambassador’s residence and the same night he was onboard a plane to Sweden.

According to a CNN report, Oswaldo Paya’s daughter has forwarded claims that a further car was involved in the crash and that the vehicle deliberately drove into the car carrying Aron Modig.

This information was however denied by the Cuban government in a statement on Sunday, citing eye witnesses.

At the press conference Modig said that as far as he knew, the crash was an accident.

Modig told DN he is relieved to be back in Sweden but worried about those he left behind.

“What I bring with me back is the concrete knowledge of how different our systems are. I went there to help contributing to a freer Cuba, but was jailed and interrogated. That’s how Cubans are treated every day,” Modig told DN.