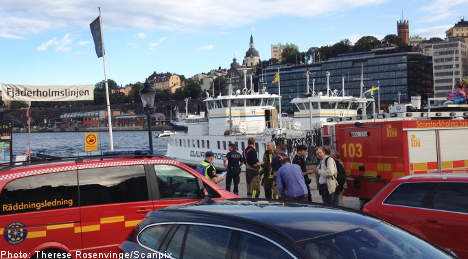 “It was very scary to be onboard,” said ferry passenger Iben Linde to news agency TT.

Emergency services, police and ambulance were quickly at the scene after several passengers sounded the alarm that the ferry from Djurgården had rammed into the quay at Slussen.

Linde, who is on holiday in Stockholm, told how the ferry was travelling at a high speed. He told of how he saw one injured passenger who was bleeding profusely from a head wound.

“It was a very, very hard smash. A lot of children were sad and scared,” she said.

According to Kent Johansson at the Stockholm fire brigade, no one was seriously hurt. Although many were left suffering from shock.

“Naturally, a whole ferry full of people which crashes straight into a quay and everyone more or less falls over – many become worried and shocked,” he said.

A section of Skeppsbron was closed off after the crash and a large number of people congregated on the quay.

One theory behind the crash is that ferry staff did not get the ferry into reverse in time. Police are now investigating the accident and the Maritime Inspectorate Office (Sjöfartsinspektionen) has inspected the vessel.

The captain of the ferry has furthermore been tested for drunk driving but was found to be sober.