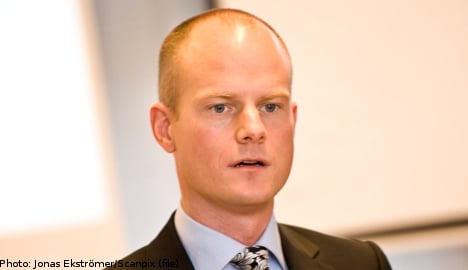 “It is with sadness that we announce that Johnny left us last night,” the family tweeted from Munkhammar’s account on Tuesday morning.

Munkhammar was an MP for Stockholm and a member of the committee on taxation in the Riksdag. He has published books with Swedish think tank Timbro, worked at the Confederation of Swedish Enterprise (Svenskt Näringsliv – SN) and written a children’s book.

His friend and colleague Fredrik Segerfelt wrote on his blog on Tuesday:

“During his (almost) 38 years, Johnny accomplished at least twice as much as most people do in twice as long life spans. Not only did he write numerous books, give lectures to top decision makers around the world, and win a seat in the Swedish Riksdag.”

“Almost literally until he took his last breath, Johnny fought for freedom. As late as August 10th, he published an op-ed with Swedish Finance Minister Anders Borg.”

Munkhammar revealed on national television in 2009 that he was suffering from adenoid cystic cancer (AdCC), a rare form of cancer which had attacked a gland in his neck.

“I was told on my 35th birthday while in a taxi in Greece. My mind focussed very much on whether it could go badly and also on my family,” he said to TV 4 at the time.

Munkhammar left behind a wife and two young daughters aged three and six.

The group leader for the Moderate party in the Riksdag, Anna Kinberg Batra, wrote that the thoughts of Munkhammar’s friends and colleagues now focus on his family.

“We will miss and remember Johnny Munkhammar as an astounding and always enthusiastic politician and debater to the very last,” she wrote in a statement.

Munkhammar was an active tweeter and blogger and his last few tweets went out a few days ago when he commented on having his own room at the hospital and eating crayfish with family and friends.

“He tried to live like normal. I visited him last time on Wednesday. We talked about the summer, politics and things like that,” said Segerfelt to daily Aftonbladet.

“As a public person he was one of Sweden’s most skilful creators of public opinion and politicians.”

“Johnny will be dearly missed by thousands of fans of liberty, by hundreds of friends and most of all by his family,” Segerfelt wrote on Munkhammar’s blog on Tuesday.