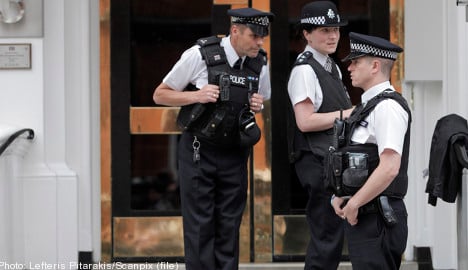 British police outside the Ecuadorian embassy in London.

“WikiLeaks condemns in the strongest possible terms the UK’s resort to intimidation,” it said in a statement.

“A threat of this nature is a hostile and extreme act, which is not proportionate to the circumstances, and an unprecedented assault on the rights of asylum-seekers worldwide.”

WikiLeaks founder Julian Assange, an Australian national, has been in the embassy since June in a bid to avoid extradition to Sweden, where he faces questioning over sex assault claims.

The Australian fears Stockholm will turn him over to the United States where he could face espionage and conspiracy charges over revelations by his website.

Ecuador Foreign Minister Ricardo Patino earlier said Britain had threatened to “storm our embassy if Ecuador does not hand over Julian Assange”.

WikiLeaks said the embassy was currently surrounded by police “in a menacing show of force”.

“Any transgression against the sanctity of the embassy is a unilateral and shameful act, and a violation of the Vienna Convention, which protects embassies worldwide,” it said.

“This threat is designed to preempt Ecuador’s imminent decision on whether it will grant Julian Assange political asylum, and to bully Ecuador into a decision that is agreeable to the United Kingdom and its allies.

“We remind the public that these extraordinary actions are being taken to detain a man who has not been charged with any crime in any country,” it added.

A British Foreign Office spokesman has said police were ready to arrest Assange for breaching the terms of his bail granted in 2010.

fulfill this obligation,” the spokesman said in London.

WikiLeaks noted that the tougher stance by London coincided with British Foreign Secretary William Hague standing in for Prime Minister David Cameron while he was on vacation.

It claimed Hague’s department, the Foreign and Commonwealth Office, had overseen the negotiations to date with Ecuador.

“If Mr Hague has, as would be expected, approved this decision, WikiLeaks calls for his immediate resignation,” it said.

Assange’s mother earlier Thursday claimed the United States was behind the British threat.

“What the US wants, the US gets from its allies, regardless of if it’s legal or if it’s ethical or in breach of human or legal rights,” she told reporters in Australia.

asylum and would announce it at 2pm CET Thursday.