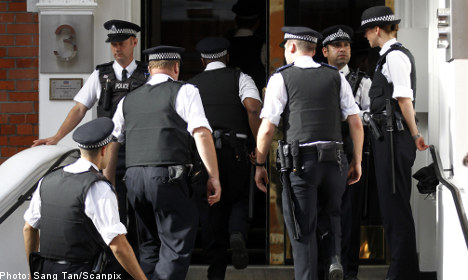 The purpose of officers entering the premises housing the embassy is still not known.

Ecuador’s Foreign Minister Ricardo Patino said Wednesday that it would be “unacceptable” for British police to enter the embassy itself, but noted that his country “has made a decision” on Assange and will announce it Thursday at 7am (2pm CET).

Patino said that Ecuador had received “an express threat in writing” from Britain “that they could storm our embassy if Ecuador does not hand over Julian Assange.”

“The position taken by the government of Great Britain is unacceptable, both from the political and the legal point of view,” he said, warning that entering the embassy without authorization “would be a flagrant violation of the Vienna Convention” on diplomatic relations.

Assange took refuge at the embassy on June 19 to avoid extradition to Sweden, which he claims plans to eventually surrender him to US authorities.

“The UK has a legal obligation to extradite Mr Assange to Sweden to face questioning over allegations of sexual offenses and we remain determined to fulfill this obligation,” a British Foreign Office spokesman said.

But even if the asylum request is granted, it is unclear whether Assange will be allowed to leave, as British police were waiting outside the embassy ready to arrest him for breaching the terms of his bail granted in 2010.

“Throughout this process we have drawn the Ecuadoreans’ attention to relevant provisions of our law, whether, for example, the extensive human rights safeguards in our extradition procedures, or to the legal status of diplomatic premises in the UK,” a Foreign Office spokesman said to national British broadcaster BBC.

“We are still committed to reaching a mutually acceptable solution.”

According to the broadcaster, the law in question is the Diplomatic and Consular Premises Act of 1987.

This law allows the UK to revoke any diplomatic status of an embassy on UK soil, which allowing police to enter the building.

By using this privilege, they would therefore be able to arrest Mr Assange for breaching the terms of his bail.

Ecuador had said it was reviewing the sexual misconduct allegations as it weighed his asylum request. Assange maintains he had consensual sex with the alleged Swedish victims.

A few activists camped out overnight outside the embassy.

The protest’s Facebook page claimed another 600 more demonstrators were expected later at the embassy and have threatened to “occupy” it.

“This situation is contradictory in a country which heralds free speech,” an 18-year-old protester who gave her name as Ella told AFP.

“What he (Assange) did is beautiful and important. We need to show solidarity.”