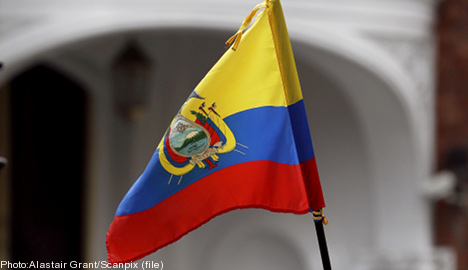 State Department spokeswoman Victoria Nuland declined comment on Ecuador’s offer of asylum to Assange but rejected assertions by WikiLeaks and Quito that the Internet activist needed protection against the United States.

“With regard to the charge that the US was intent on persecuting him, I reject that completely,” Nuland told reporters.

Asked whether the United States was pressuring Britain to seize Assange, who has been holed up for two months in Ecuador’s embassy in London, Nuland said she had “no information to indicate that there is any truth to that at all.”

Nuland did not comment on whether the United States was interested in general in prosecuting Assange, saying: “I am not going to get into all of the legal ins and outs about what may or may not have been in his future before he chose to take refuge in the Ecuadorian mission.”

The Organization of American States, which met in emergency session, said it would decide Friday whether to call a meeting of its foreign ministers. Britain has observer status in the OAS.

The Australian government maintained its stance that the asylum decision was a matter for the WikiLeaks founder and the governments of Britain and Ecuador, reported AAP.

“Australia’s role remains unchanged. Mr Assange remains in the Ecuadorian Embassy in London, and we have and will continue to make regular contact with embassy staff to check on his welfare and offer him consular assistance,” a spokesman for the Australian Department of Foreign Affairs and Trade told the news agency.

The EU’s foreign affairs chief Catherine Ashton kept her distance Thursday from the furore in London and Stockholm over Ecuador’s decision to grant Julian Assange asylum.

“This is essentially a bilateral issue between the UK and Ecuador,” a spokesperson for Ashton, the English baroness who heads the European Union’s diplomatic service, told AFP.

The Ashton official said that “the EU delegation in Quito is following this case closely, in contact with the UK embassy.”

The spokesperson added: “We trust that the issue will be resolved through

dialogue and in full accordance with applicable international law.”

Mina Andreeva, spokeswoman for EU justice commissioner Viviane Reding, said the EU arrest warrant “applies when one EU country requests the surrender of an EU citizen to another EU country.

“It would only apply if the UK arrests Assange and then decided to extradite him – or not.”

“It cannot apply while he is in the embassy of Ecuador,” she underlined.

Assange is wanted in Sweden for questioning about allegations of rape and sexual assault, and a British court had already ruled that Assange could be extradited.

Angering the United States by releasing a trove of classified US documents on his whistleblowing website, Assange been holed up in the Ecuador’s embassy in London since June 19.

Ecuador said Thursday that it was offering asylum to Assange because London, Stockholm and Washington refused to guarantee that Assange would not be sent on to the United States.

Ecuador has called a meeting of foreign ministers from the South American regional bloc UNASUR on Sunday.

“Nobody is going to scare us,” Ecuador’s President Rafael Correa said on