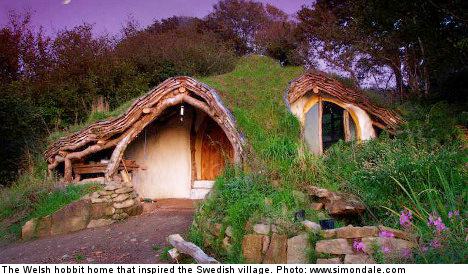 “Living in a hobbit house is the smart and sustainable way to live in the future,” John Higson, the co-founder of the project told The Local.

In 2011 John Higson and Marie Eriksson co-founded Drömgården, a self-sustainable and eco-friendly farm and village, but the idea to build hobbit houses didn’t come until Higson heard about Simon Dale who’d built one for his family in Wales.

“Seeing Simon’s houses blew me away. They’re beautiful, unique and completely sustainable, and what a fantastic way to live,” John Higson told The Local.

But it was not until Higson and his partner bought a plot of land inside the area of Drömgården, but a nice distance from the other buildings, that the idea was put into practice.

“I’ve always enjoyed living a little bit differently. The idea of just a hobbit style village came from talking to other people interested in being part of Drömgården,” Higson said.

Like Dale’s hobbit house which is located in a secluded part in Wales, the Swedish versions will be made with natural materials like straw, clay and timber, and erected on the edge of a forest overlooking some fields.

“Hardly anyone has been there in years as it was a restricted area site owned by the military. So nature has taken over and made it a perfect hobbit territory,” Higson said.

Apart from providing people with a sustainable way of life in the countryside, Drömgården allows people to become part owners of the already built cottages, circus wagons, the dairy, or in due time – the beer brewery and hobbit houses.

“Why pay for having a countryside house standing empty most of the year, when you can use your hard earned kronor for what you really need,” Higson said.

This allows people to own a small part of Drömgården but also to live there for whatever amount of time they want to, Higson explains.

The first house is expected to be completed by the end of 2012, and approximately fifteen more houses are currently planned under the supervision of Simon Dale, but the exact number is still undecided.

“People will be invited to join Simon Dale to plan their houses, but we’re debating as to whether it would be a good idea to build a pub first,” Higson said to The Local.

“You can’t have a hobbit village without a pub.”