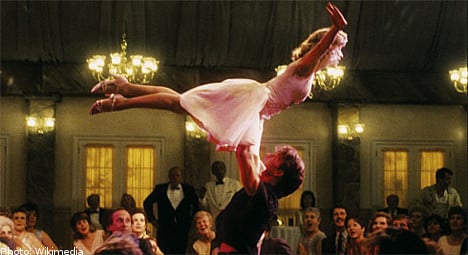 “Nobody puts Baby in a corner” is the quote etched into the front of the new library at the Swedish seat of learning, a line made famous by Patrick Swayze in the surprise smash hit from 1987.

The choice of the artwork, instead of one featuring a message more closely associated to academia, has however been met with dismay from some quarters.

A Facebook thread dedicated to the white neon artwork has been filled with scathing comments of the message and the money spent on it, according to the local Nya Wermlands Tidning (NWT).

“This is the most stupid thing I have seen in ages,” wrote one angry poster.

But University rector Åsa Bergenheim has defended the artwork, which cost the university 170,000 kronor ($25,500).

“There are always critical voices when it the university is concerned. Words are obviously very controversial as art,” she told NWT.

Bergenheim underlined that the piece was funded by a donation and and that she felt the message suited the university perfectly.

“It means that we straighten our backs and give our best – because we are capable,” she said, adding that it is a universal message that could apply to the whole of Sweden.

While the immortal cinematic words are already in place on the façade of the new library, the artwork will be formally inaugurated on August 29th.

The piece has been created by Moa and Mikael Krestesen from Umeå in northern Sweden and according to the artists the intention is, among other things, to encourage young girls and women to take space.